Would Ya Lookit That

In preparation for a particular event coming next month, a bit of shopping was in order. My old camera, the one which served the Quacked Panes effort so well, has gotten too cantankerous and difficult to deal with. (Mapping & blacking out the increasing number of “hot pixels” is a serious chore.) So… we went out and picked up a modest but nifty little point-and-shoot camera. It isn’t as professional and fancy as the old Pentax but it does a decent job. I mean, look at this: 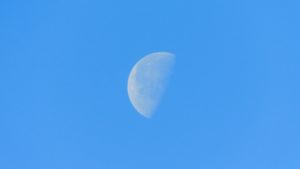 Handheld, no digital zoom, taken while standing just outside the office building.

I’ve never taken that good a shot of the Moon before today. And I haven’t even dialed in the feature settings, that’s just on full “auto.” Hey, how about a nice early morning shot of some public transit hardware? 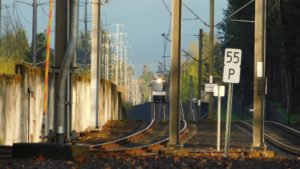 Yep, I was just another camera geek standing on a MAX platform.