Sometimes you just want a silly adventure movie with a clear villain, a damsel in need of rescuing, a wacky bunch of heroes, and a flagrant disregard for the laws of physics. 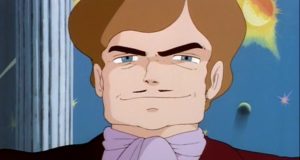 I wasn’t kidding about the “clear villain” part. Just look at this guy.

Castle of Cagliostro is Hayao Miyazaki’s directorial debut feature film, working with (and somewhat altering) characters created by a manga artist who goes by the name of Monkey Punch.

Were I to sum it up in a word? Madcap. 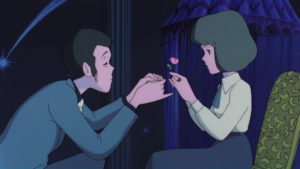 Oh, that Lupin. Such a charmer.

It’s kind of a caper flick, in that our erstwhile hero is a world-(in)famous thief named Lupin III. Wits are matched, ridiculous schemes are hatched, other schemes are laid bare, and bullets only strike bodies when the plot needs them to. It’s absurd, and I love it dearly.

Cagliostro is such a pure adventure fable. The bad guys get what’s coming to them, witty dialog abounds, action beats are breathtaking and wild, and so on, and so on. It’s not “turn off your brain” action movie fluff, because your brain is needed to appreciate the clever writing and filmmaking on display here. 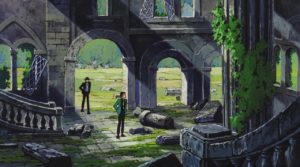 Also, check out the lovely scenery.

The movie isn’t all that subtle, and it seems to actively hate the laws of physics. 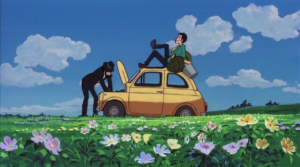 It doesn’t LOOK like a car that can drive up a sheer cliff diagonally, does it?

Based on this movie, from time to time I tried to get into other Lupin III shows. Somehow, this is the one that works for me. Given that Monkey Punch himself has said that this is indeed a good movie but “his” Lupin would have done things… differently… I guess I’m okay with this being “my” Lupin.

One needs merely to look at Clarisse to see the template for Miyazaki’s heroine character designs for many years to come.

You’ll want to pick this up on Blu-Ray. It should be less than twenty bucks to grab the “Collector’s Edition,” and it’s money well spent.