It’s been a rough week and it’s about time for another non-anime pick, so let’s go with something short and sweet and very different.

Creature Comforts is a short film, about five minutes long, created by Aardman Animation. It spawned a short series of follow-up television commercials and then a series, but to my mind when I think of this title I think of the short which started it all. 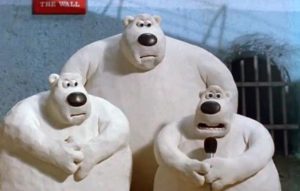 “The zoos are very important to animals…”

It’s five minutes long, there isn’t really a story. It’s just a series of interview clips. The audio is from interviews of actual people talking about their living conditions, among other things. The animators mapped those interview segments onto zoo animals with amusing results. 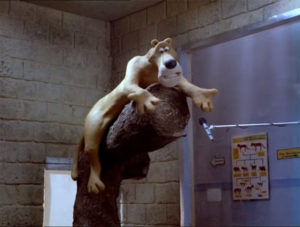 I like the clever way that the Aardman team took audio clips that weren’t intended to be funny and made them funny through visual context. Also, there’s a lot of visual detail to take in, never mind the way they managed to breathe life into lumps of plasticine. 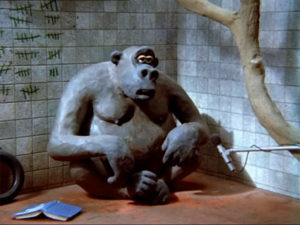 …maybe you were traumatized by a Gumby And Pokey short when you were younger? I don’t know. Anyway, stop-motion animation is cool, dammit. Yes, cooler than bow ties.

Watching this short film takes me back to the early 1990s when I hung out at Cinema 21 a lot. Any time there was an animation festival feature, I was there at least once. (I also saw several imported anime films at that theater… for better or worse.)

There’s a Creature Comforts DVD release which includes a few other shorts… but not any of the Wallace & Gromit shorts, sadly.

Or… well, let’s see how long this link works.