It’s been a long couple of months. Bad weather, bad news, grim mood, no enthusiasm for much of anything.

So, I’ve been playing a lot of games lately. Here’s what’s keeping me occupied:

Stardew Valley – I never played Harvest Moon or its ilk but for some reason I decided to jump on the hype train when this came out, and I have not been disappointed. You play as a farmer, struggling to get your inherited run-down farm up and running. You plant crops, you raise animals, you sell the vegetables and eggs and milk and crafted products for money, you collect things to restore the dilapidated town center, you delve into the mines (too deeply, perhaps) for more raw materials and artifacts, you earn friendship with your new neighbors (and perhaps marry one of them)… there’s a lot going on, is what I’m saying. It’s a very casual game in most ways but you have to pay attention to really prosper.

Guild Wars 2 – It’s an MMO. It’s published by the bastards who shut down City of Heroes, so yes, I have moral qualms about giving them my money. But it’s as good of an MMO as I can find at the moment. I’m not really into it as much anymore but it scratches that particular itch.

Diablo III – Until they release a proper HD patch for Diablo II, this is where I’m getting my isometric-perspective monster-smashing fix. It’s repetitive, sure, but sometimes it’s not about the novelty or the challenge, it’s just about making horrific demonspawn go “sputch” in satisfying ways.

Catan Universe – This is the second computerized rendition of the Settlers of Catan board game that I’ve tried. The first one is… buggy, to put it mildly. This one is very German and very very pre-release quality, but hey, you can play with/against friends and/or against the AI, and it’s a solidly playable experience. If you can’t get friends to your house to play around a table, it’s the next best thing.

Overwatch – I haven’t really played many “shooters” this past few years. Sometimes I’ll sign into one of the first two Borderlands games for a bit but I think I’m just out of touch with that playstyle. I know I started out playing Doom & Doom 2 quite well but it’s a whole different world now. And while Overwatch tries to match people up “by skill level,” I’m almost always the least-skilled person in any given match. I don’t regret the purchase but I’m not compelled to play, either. I probably need to find a group to play with; that was always most of the fun in the old Doom/Quake/UnrealTournament days, after all. Hmm.

…yeah, that’s pretty much what I’ve been playing the last few months.

With only a day (mostly) of Pokemon GO under my belt, I have some thoughts, presented in bullet point form… or Pokeball-point, if you prefer:

Having wandered away from Guild Wars 2 lately, I dabbled with Diablo III for a while until someone sent me a gift on Steam: Stardew Valley.

You may have heard of it.

It’s really working for me. I can farm crops, I can raise animals, I can craft things, I can arrange my domain how I please, there are goals to meet (both “kill X in the mines for a reward” and “bring one each of all these things for a reward”), and some days it’s nice to just run around the farm cleaning up debris. And sometimes the game surprises you. 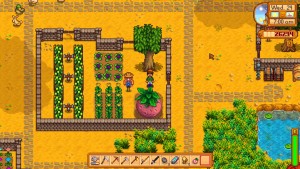 When life hands you giant melons, reach for your axe…

In the upper left corner you’ll note that I have a duck and a bunny, named Plucky and Harey respectively. (Chickens are named Henri, Etta, Clucky, and so forth.) I am bad at pet names, let’s be honest.

Now, I’m not min-maxing my gameplay. I’m just… having fun. If you’re a casual gamer, Stardew Valley may in fact be an ideal game for you. Possibly.

Of course, every now and then the game gives you the middle finger. 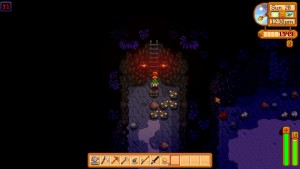 All that gold, no way to reach it because the only exits from my current square are up and out of the mine, or down to the next level…

If you’re on the fence about trying it out, get in touch. Maybe I could be convinced to send it as a gift. That’s how I got my copy, after all. (I turned around and bought copies for Kyla and my daughter, so paying it forward is accomplished.) It’s only $15, and money well spent.

Why I Left WildStar

I canceled my WildStar subscription this morning. Admittedly, most of the reason for this comes down to finances: It’s a tough time of the year, this month’s tighter than most, and so forth. Fifteen bucks for a game I rarely play is fifteen bucks I could put toward… food, let’s say.

To be fair, WildStar is a great MMORPG-type game. It’s inventive, it’s colorful, it’s clever. It features the best housing system I’ve ever seen in a game. I love the “telegraph” feature, which lets you know exactly where a given power is going to strike. (Those of us who cut our MMO teeth in City of Heroes know the pain of having to guess where that cone AoE is going to land.) The worldbuilding detail is incredible.

However, what a lot of people love about the game is what I don’t love at all: WildStar is MMO gaming on Hard Mode.

END_OF_DOCUMENT_TOKEN_TO_BE_REPLACED

There are three computer game styles I love. Shooters like Quake and Unreal Tournament help me unwind after a stressful day. Realtime Strategy games like Age of Empires give me that wonderful experience of building an army and obliterating my enemies. And there are turn-based games like the Heroes of Might and Magic series.

The long-awaited fourth installment of “HoMM” makes a few significant changes to the gameplay that made the previous titles so successful, but keeps intact the best parts of the series. Anyone who has played either Heroes 2 or Heroes 3 will spend a fairly short time adjusting to the changes in the new game.

The most significant gameplay changes are the new skill system and the fact that heroes and creatures truly work together interchangeably now. You can have more than one hero in a group, or you can have a group without heroes at all. These creature-only groups are limited, but they make great decoys. Having heroes take active part in combat takes getting used to, but after a while you realize that this is how it should have been done all along. Your opinion may differ if you’re a longtime Heroes player, but for my money this is the way to go.

What takes more mental adjustment for veteran Heroes players is the new skill system. It’s complex. A hero that starts out with one title can be built to wear another with the proper progression of skills. Take my advice: If you buy this game, also buy a copy of the Prima guide just so you have a handy set of detailed charts.

Other changes include a totally new visual style, wandering creature stacks, caravans for creature transport, daily creature generation and a few new types of map structures. Oh, and as of this writing the game has no networked multiplayer capability. Hotseat is an option, however, so our household is okay.

Heroes IV is a splendid game overall. The only minor quibbles I have right now are the disabled multiplayer mode due to be fixed in a future patch release and a seemingly slow and difficult “early” game. In other words, when you’re starting out it takes forever to move around and you tend to have difficulty patrolling your area effectively. I haven’t completed any of the campaigns or larger maps yet so this may not turn out to be an issue in the long run.

If you want a game that looks great, is mentally stimulating and terribly addictive, pick up Heroes of Might and Magic IV. I highly recommend it.

I’ll have to preface this review, the first I’ve done of any software package, by pointing out that I’ve been playing golf on PCs and game consoles for years. Not all the time, perhaps, and I’ll go months without swinging a virtual club, but I keep coming back to the digitized-golf genre again and again.

About five years ago, give or take, I won a website design contest put on by Microsoft. To be more accurate, I was one of a number of winners. The prize was, oddly enough, $100 worth of Microsoft products. I picked up Windows 95, a Sidewinder Pro joystick, Fury^3 and Golf 3.0 out of that deal. The Sidewinder Pro won’t work with machines that have 100MHz-and-up bus speeds, Fury^3 is a lame rehash of Terminal Velocity, and I’ve long since given up Win95 for Win98SE and Win2K.

Golf 3.0, however, still gets a spin on our machines. It’s sadly dated, of course, as the graphics quality is so-so in its best moments. Putting is pretty easy, and you only get two courses so after a while the only challenge is in not screwing up the swing. (When you get right down to it, that’s probably the main challenge in any golf game, digital or otherwise.)

So we’re at the outlet mall yesterday, stopping in at the Kay-Bee Toys outlet for a laugh, when I notice a copy of Links LS 1999 in the software dumpster. “Hmm,” I say to myself, “What have we here?” A few minutes later we leave the store with a brand-new $7.99 copy of the game.

What did I get for my money? Vastly improved graphics. Four courses. The ability to conjure a variety of view windows in which I can aim my shot. Instant-replay that actually looks good and is useful. Much, much more realistic physics. A wide variety of gameplay “modes,” mainly consisting of fun rules/winnings changes.

If you’re a golf-gaming nut, you’ll obviously have better software than this on your PC. If you’re a much more casual digi-golfer like me, then go out and find a copy of Links LS 1999 for a few measly bucks and be happy. I certainly am.

(Final note: Access Software was purchased by Microsoft, and the next version of this game is Links LS 2000, a virtual re-release that only adds some courses and the ability to connect to Microsoft’s gaming zone. Yay. For my money, stick with the cheaper and identical product and duck the Microsoft empire once again.)