Apparently this gameplay status update series is a thing I’m doing lately. Hey, at least it means the ol’ WordPress site is getting some use. I made a fair chunk of progress in Satisfactory this week and wanted to share some details about how that went.

END_OF_DOCUMENT_TOKEN_TO_BE_REPLACED

How about a game status update for the thing that has taken over most of my free time this past month? (Yes, I bought it on Dec 3rd 2020 and here it is, Jan 3rd 2021 and the honeymoon ain’t over yet.) I managed to send up another shipment via the space elevator, which means I unlocked the potential to make petroleum products such as plastics and fuel from the newly-available oil.

The operative word there is, “potential.” In order to take advantage of the ability I’ll need to craft a bunch of materials needed to build the production facilities. I have a spreadsheet for tallying up the requirements.

Yes, a spreadsheet. For a video game. No, I don’t know what sort of stranger I’m becoming, either.

At any rate, a big part of today’s session involved retooling my meager copper operation into something which can crank out more materials, faster, routed and stored more usefully. I need Wires (made from copper) to pair with Steel Pipes (made from steel, which is made from iron and coal) to make Stators which, when paired with the Rotors that the iron works produces, makes Motors, and I need hundreds of those to get the oil fields project running.

You get the idea. Maybe.

END_OF_DOCUMENT_TOKEN_TO_BE_REPLACED

Early this month, a friend on Twitter invited me to watch their streaming session, a tour of a power plant they’d just finished in an early-access game they’ve been playing and talking up for a while now: Satisfactory. The game’s a bit like a mash-up of a survival game (“you’re alone in this wilderness with a couple of basic tools, now make something of the situation”) and a systems-management sim (Factorio comes notably to mind).

It didn’t take long for me to decide that I needed to try this game for myself. The demo of the Hyper Tube sealed the deal, if I’m honest. “I have got to try this!”

(Spoiler: I have not yet tried the Hyper Tube. I’m close to unlocking the tech, but I have other priorities at the moment.)

I ponied up the thirty bucks, connected to my (ugh) Epic account (on the off-chance that at some point multiplayer is something I want to try), and found myself in the desert on an alien world, armed with a taser (needed for dealing with the occasional hostile local fauna, not that combat is much of a factor in this game most of the time) and carting around a box of parts to build my starter “hub.”

Weeks later, I’ve poured nearly 24 hours of playtime into this thing and am loving it. The gameplay loop boils down to facing a new logistics challenge and figuring out how to achieve the immediate goal in as efficient a manner as you can fashion, then moving on to the next one. It’s not really an “open world” affair: You are given a strict hierarchy of milestones, though within a given milestone level you can choose in which order you want to tackle them, and the details of exactly how to meet your goals is in your hands. This is ideal for me, as I work best to a clear set of guidelines.

The first stretch of the game is very… manual. You hand-craft most of the things you need, you hand-feed the various machines, your equipment is strewn around wherever you can clear the space, and so forth. A lot of your early game time is spent collecting every single piece of plant life you see in order to power the “bio-fuel” power generators that keep your equipment churning out needed materials. Your main goal at that point is to progress far enough along the tech tree to unlock coal power, then acquire said coal power. Once that’s up & running you can stop spending every free minute collecting & processing plant life and start focusing on the larger picture.

A big part of improving that larger picture is making your production environment look a bit less… haphazard.

Let’s talk about my latest project by way of example.

END_OF_DOCUMENT_TOKEN_TO_BE_REPLACED

My life itself isn’t anything to write about, as it’s really just “eat sleep work lather rinse repeat” for the most part. I decided to share a bit of how I spend my leisure time lately, though…

And that’s about that, entertainment-wise. If I forgot something, hey, that’s fodder for another post…

The things I do for the rubber duck brand 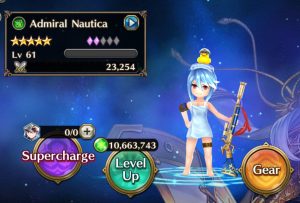 The game is Valkyrie Connect, a “gacha” mobile game of collecting fighters to defeat monsters blah blah blah whatever, it’s an amusing way to pass an hour or so per day, give or take. When this latest event appeared in which the publishers clearly expect folks to plunk down ridiculous amounts of money, my first thought was, “Like hell I will.”

My second thought was, “oh crap Nautica gets a rubber duck, I’M DOOMED.”

Turns out, I didn’t need to spend very much money. Ahem.

It’s been a long couple of months. Bad weather, bad news, grim mood, no enthusiasm for much of anything.

So, I’ve been playing a lot of games lately. Here’s what’s keeping me occupied:

Stardew Valley – I never played Harvest Moon or its ilk but for some reason I decided to jump on the hype train when this came out, and I have not been disappointed. You play as a farmer, struggling to get your inherited run-down farm up and running. You plant crops, you raise animals, you sell the vegetables and eggs and milk and crafted products for money, you collect things to restore the dilapidated town center, you delve into the mines (too deeply, perhaps) for more raw materials and artifacts, you earn friendship with your new neighbors (and perhaps marry one of them)… there’s a lot going on, is what I’m saying. It’s a very casual game in most ways but you have to pay attention to really prosper.

Guild Wars 2 – It’s an MMO. It’s published by the bastards who shut down City of Heroes, so yes, I have moral qualms about giving them my money. But it’s as good of an MMO as I can find at the moment. I’m not really into it as much anymore but it scratches that particular itch.

Diablo III – Until they release a proper HD patch for Diablo II, this is where I’m getting my isometric-perspective monster-smashing fix. It’s repetitive, sure, but sometimes it’s not about the novelty or the challenge, it’s just about making horrific demonspawn go “sputch” in satisfying ways.

Catan Universe – This is the second computerized rendition of the Settlers of Catan board game that I’ve tried. The first one is… buggy, to put it mildly. This one is very German and very very pre-release quality, but hey, you can play with/against friends and/or against the AI, and it’s a solidly playable experience. If you can’t get friends to your house to play around a table, it’s the next best thing.

Overwatch – I haven’t really played many “shooters” this past few years. Sometimes I’ll sign into one of the first two Borderlands games for a bit but I think I’m just out of touch with that playstyle. I know I started out playing Doom & Doom 2 quite well but it’s a whole different world now. And while Overwatch tries to match people up “by skill level,” I’m almost always the least-skilled person in any given match. I don’t regret the purchase but I’m not compelled to play, either. I probably need to find a group to play with; that was always most of the fun in the old Doom/Quake/UnrealTournament days, after all. Hmm.

…yeah, that’s pretty much what I’ve been playing the last few months.