We are, one is forced to admit, a Funko Pops household. Like, we’re not addicted to buying all of them, nothing like that. But the “I can quit any time” line is just that, a line. Case in point:

Some time ago, before the movie was anything more than wishful thinking, I picked up a Captain Marvel. Cool! Onto the shelf she went.

Then the movie happened, and I picked up a Vers. Okay! I had two different Captain-Marvel-ish Funko Pops on display. Fine, fine, no problems.

Then my birthday arrived and I found myself with another variant. Boy howdy did Funko go nuts on these or what?

Then came the Captain Marvel “blind box” (Vyx ordered it, not me!) with two more. And a sixth arrived from… look, I don’t even remember, okay? But that one glows in the dark. Bonus! 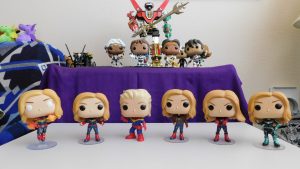 All the Captain Marvel Funko Pops (with bonus Voltron crew)

Look! I have my very own Carol Corps!

(For fun, and at Vyx’s suggestion, I took another quick pic:)

Edit: I was putting away dishes, which included a Captain Marvel glass (part of the aforementioned blind box) and, well: 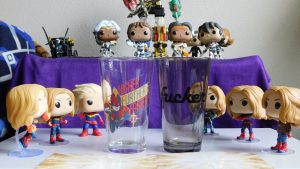 We’ve had a set of “naughty words” glasses for years and years. In a way, this was inevitable.