One of the “what if” scenarios that comes to mind occasionally is, “what if a fantasy-tropes-filled world met up with a modern military force?” Well, what if a former soldier tried their hand at writing such a clash?

Its full title is translated (more or less) as Gate: Thus the Japanese Self-Defence Force Fought There! but generally you can just call it GATE. The story started out as a novel series, then branched out into manga and (for our purposes) 24 episodes of anime.

A magical portal is opened into another world. A nation hungry for conquest pours through the portal and… gets their collective ass handed to them. This story is what happens afterward, when the JSDF builds an encampment on the other side of the portal through which invaders had previously come. Their goal is to prevent future invasions, mostly by trying to make lasting deals with whoever is in charge over there. 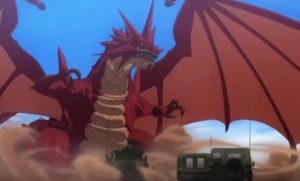 Oh, and along the way they face a gigantic dragon. Pretty cool, huh?

Our primary focus character is a guy who really just wants to enjoy his entertainments and work no harder than he must. A born slacker, really. Unfortunately for him, he’s the right guy in the right place at the right time and oh, by the way, he actually is quite competent when he gets to work. He is part of the expeditionary force investigating what’s on the other end of the magical gateway between worlds.

Now let’s be clear: This is an action-comedy, mostly. The premise is taken only as seriously as the story needs to.

GATE manages something rather tricky, this blend of fantasy-tropes setting and modern military workings. What’s more, it ekes a decent story out of the whole affair. Add in a bunch of entertaining characters and you’ve got yourself a good way to pass a few hours. It’s funny, it’s heartfelt, and sometimes it’s a bit naughty. 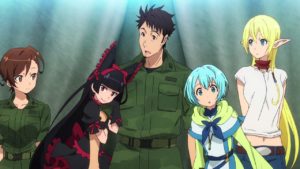 Now, this looks harem-y but it’s not nearly as bad as this might make it look in that regard.

It’s been argued that GATEÂ glorifies the military somewhat. I don’t think it goes too far in that direction; in fact, portraying most of the JSDF personnel as decent and competent is just plain building good role models, as far as I’m concerned. (I prefer this portrayal to, say, a bunch of “oo-rah!” honor-and-glory meatheads.) But now you are duly warned.

Also, Rory. Um. How can I put this? She… really enjoys mayhem. A lot. A… whole lot. In a deep and profound fashion. Ahem. 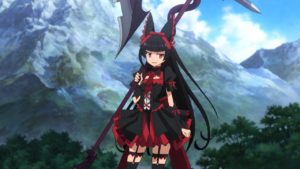 I mean, she’s a hoot most of the time, and a source (or at least instigator) of many of the show’s best funny moments. But. Hooboy. There are a few moments in the show where you may find yourself thinking, “Should I be watching this?”

One of the most interesting characters is not really one of the sort-of-haremettes latched onto our-hero-Itami, but rather the ridiculously-named Pina Co Lada, princess of the Empire which started this mess in the first place. When she’s not being distracted by the various people and products of Japan, she’s doing everything in her power to ensure peace… mainly because it takes her no time at all to realize that if the JSDF was serious about doing so, they could obliterate her homeland. I like her story arc quite a bit. 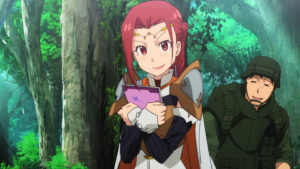 The way to Pina’s heart is through boys-love comics, apparently…

It’s a relatively recent anime series so, luckily, GATE is on Crunchyroll for your convenience.