Any time someone starts in on a list of all-time great anime, eventually someone brings up a particular show well-known for its genre-blending motif and musically-influenced styling.

This is the other really big show by the same director which meets that description.

Samurai Champloo is a 26-episode anime series made in the early 2000s.

It’s been called a lot of things, but I think it’s best described as a “three losers on a road trip.” 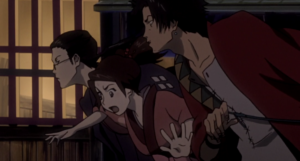 They may win a lot of fights, but they’re still losers, really.

The swordplay impressed me right in the first episode; it’s genuinely brilliant in its choreography and depiction, and generally remains at a high quality throughout the series. The really clever hook, though, is right at the very start of the series. We’re given a setup: It’s the Edo period in Japan. Two men are sentenced to death. Then comes the expected flashback (complete with title card reading “One day earlier”) to how these men came to be in this situation… only, the time jump is to now, the modern day. A revised title card reads “One day earlier!” and the video… rewinds, like a VHS tape, back through a few hundred years.

It’s that kind of show. 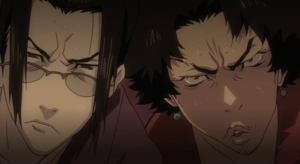 You don’t have some kind of PROBLEM with that, do you?

Which isn’t to say that it beats the viewer over the head with anachronisms as a gimmick. They just show up here and there, treated as normal in this mixed-up version of not-really-history. Mugen’s breakdancing fighting style. Record-scratch scene cuts. A graffiti tagging contest. Things like that.

Much like its more famous predecessor, Samurai Champloo is a character study, an excuse to place unusual people into strange situations and try to make either entertainment or philosophy come out of the mix. Sometimes it’s quiet but it’s rarely dull.

How allergic are you to hip-hop? I admit it’s not really my favorite musical style but I’m glad I let my general aversion slide for the sake of this show. It’s up to you, of course. 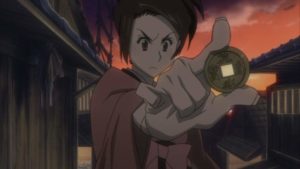 And then there’s Fuu. You may like her, or she might drive you away in frustration. YMMV.

While there’s technically an overarching story, don’t get too attached to the idea that you’re going to get a solid, satisfying conclusion. This one’s less “satisfying end to a grand arc” and more “things that make you go hmmm and also whaa?”

In a really weird way, the point of the series is kind of a found-family situation. (And we know I’m a big fan of that sort of thing, don’t we?) It’s not that Fuu-the-flighty, Jin-the-stoic, and Mugen-the-feral are particularly principled or deeply caring or anything like that. They’re brought together by circumstance, they survive adventures, and at the end they’ve bonded in an unusual way. Watching them interact is at least as much fun as watching the fights. 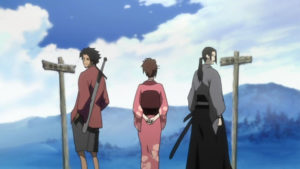 This makes me think of the line from Leverage: “One show only, no encores.”

Thanks to the miracle of the Funimation/CrunchyRoll deal, you can stream the show to your heart’s content.