Before we begin, I just want to remind everyone that this project has never been about what is objectively good, merely about what has given me some measure of joy.

Because really, sometimes what you need is a ridiculous, hot mess of a way to waste a couple of hours. 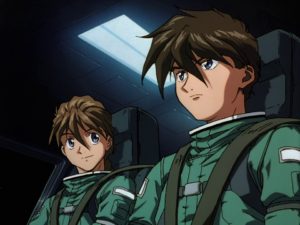 Pictured: Two of the five Gundam pilots, all of whom follow a numeric naming scheme. IT’S THAT KIND OF SHOW.

Gundam Wing: Endless Waltz is a three-episode OVA and a theatrical movie release, set after the events in the Gundam Wing anime series, none of which takes place in the same story universe as pretty much any other property with “Gundam” in the name. Gundam continuity can be a bit like, say, Doctor Who continuity in some ways… 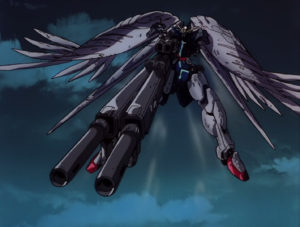 And I’m not just talking about the giant robot designs.

Oh, okay, fine. On the one-year anniversary of a hard-won peace throughout Earth and its colonies, a fanatical group of baddies wants to take over, and they start by kidnapping a high-level diplomat… who happens to be the erstwhile girlfriend of a giant-robot pilot. Only a team of oddball giant-robot pilots can save the day! But some of them chose to send their supposedly-unneeded giant robots into the sun! Hilarity ensues. And by “hilarity” I mean “bullets and missiles and energy beams.”

The Gundam Wing series, in dubbed form, aired on Cartoon Network back at the turn of the millennium. All things considered it’s not a terrible dub, and it is a kind of grand space-opera story. It is also, as noted, ridiculous. Everyone is so earnest! Differing sociopolitical views are debated from inside the cockpits of dueling giant robots! We’re expected to believe that Heero and Relena can ever manage to figure out what a functional relationship looks like! (No, seriously, that may be the most ridiculous thing about the show.) 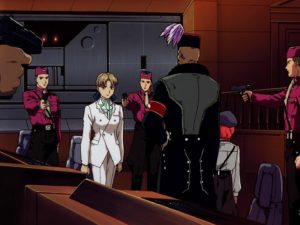 Let me be clear, though: This entry is about the OVA/movie specifically. So I like it because it’s an easily digestible morsel of the Gundam Wing experience without having to slog through nearly 50 episodes of the anime series itself. Most of the oddball giant-robot pilots show up to do their thing, there are lots of scenes of stuff getting done blowed up, we get bits of backstory on the five Gundam pilots, and everything’s wrapped up in a tidy package at the end.

Also? While the Gundam boys are ostensibly the stars of the show, in Endless Waltz we see that the women get a lot of the important work done.

It’s a giant robot show, obviously. Also it’s ridiculous. Of all the project entry subjects so far this year, this is the one where I won’t judge you for saying, “Ha ha, NOPE.”

Since it’s fairly short, I watched the movie version of Endless Waltz immediately prior to writing up this entry. I tried to imagine what it would be like for someone who’d never seen the preceding series to take in this viewing experience. Baffling, probably. If anyone tries it, please let me know how it goes for you. 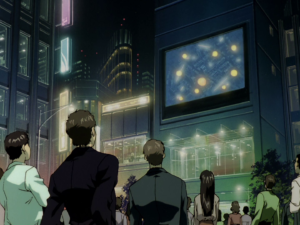 Ah yes, the “everyone gathers around giant TV screens” trope.

I’m amused that at the end (er, spoilers!) the writers go out of their way to nix the possibility of returning to this storyline ever again.