Continuing our march through the calendar year, week by week, showcasing animated stuff that has brought me joy, we touch upon something that should actually not have worked for me at all: A romantic comedy.

Ouran High School Host Club is a 26-episode anime series spawned from a manga. It features a cast of rich weirdos (as any Rocky Horror midnight showing attendee can tell you, those are the best weirdos) and one regular person who is only a bit of a weirdo. Episode by episode, the Host Club entertains its clientele and gets into wacky shenanigans. Along the way an odd sort of romantic story arc emerges. (Very odd.)

Take a bunch of pampered rich boys of wildly divergent personality types. Place them in the orbit of a stupendously odd, mostly self-absorbed leader who has decreed that they shall form a club for the purpose of entertaining young ladies, and introduce a wild-card commoner to kick off the show’s hi-jinks. Extract comedy from this scenario by any means necessary: Sight gags, running gags, verbal puns, visual puns, sleight-of-hand, subverted expectations. 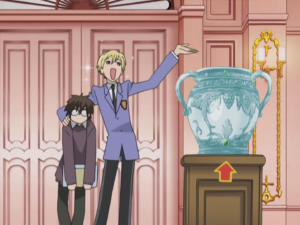 Note that red arrow. It may not look like one, but it’s a joke setup indicator. A very effective one.

Make sure, however, to show that deep down these are good (if misguided and occasionally clueless) people who are trying (in their bizarre fashion) to make the world better… or at least more fabulous.

For starters, it’s genuinely hilarious. I usually lack the temperament to sit through two dozen episodes of sitcom silliness but OHSHC just keeps delivering the laughs. It helps that the comedy is inventively absurd and rarely mean-spirited, except occasionally when the Hitachiin twins are involved…

Comedy alone might not have kept me coming back for more, so it helps that there’s a wonderful slow-burn friendship-building arc that runs through the show. Haruhi, the poor unfortunate soul who is stuck working at the Host Club to pay off a debt, ends up building a real rapport with the other members. And while there is a romance (of sorts), it’s getting to know the inner lives and interesting backgrounds for each of the characters that really clinches the emotional attachment to the show.

Did I mention it’s ridiculously funny, though? There’s a scene with a singing Haruhi and an equipment mishap that left me gasping for breath I was laughing so hard. Also, light bulbs used as a running gag and a plot point indicator.

There’s a good chance that, even if you’re on board with a full-length rom-com scenario, one or more of the characters might put you off the show completely. Like… well, probably this idiot: 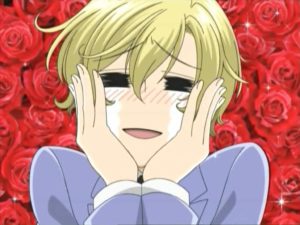 I could have used any number of noble and dashing pictures, but this is the true Tamaki, right here.

And since he’s the leader of the club and possibly the most delusional character in the series, well, you’re going to see a lot of him. He does redeem himself from time to time, which is what made the experience bearable for me where he’s concerned.

Also, if cross-dressing as a recurring theme is going to bother you… probably best to avoid this show altogether, I’m afraid.

Note that I’m playing a bit coy with the setup of the show in this post. You may already know more about OHSHC than I’ve stated here, but if you’re going in cold, you’ll get to enjoy the full effect of the first episode. Yes, even though I’ve kind of given away one part of it with the “red arrow” pic above. If you get the chance, watch the first episode as unspoiled as you can be, even if you don’t continue the series afterward. Pure comedy gold.

I won’t claim that every episode is superlative. My reasons for loving the show are subjective, and my reason for choosing this show this early in the 3WA 2017 project is to highlight that this entire writing project is about stuff that makes me happy, not about objective excellence in the realm of animated art. With that said… if you could use a good laugh, you could do worse than to sit down with nearly any given episode of OHSHC.

Also, once you’ve watched this show you’ll grok so many more anime memes on the Internet than you could previously. What’s not to love about that? 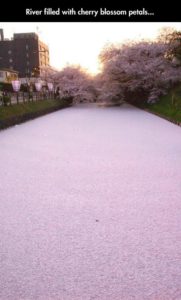 I saw this on a Tumblr post with a comment reading, “Kiss kiss fall and drown” and I burst out laughing…

Currently it’s available in subtitled or dubbed form on Funimation’s streaming site. It also pops up on Netflix from time to time.