Friends, strangers, search-engine bots: Welcome to the inaugural post in my Weekly Word Working Assignment project for 2017. Remember: The point of this exercise is to spread positive vibes in the form of celebrating cool stuff that I really liked in the hopes that you, the reader, will find a new thing to really like as well.

We’re going to start off with a short, easy one…

Voices of a Distant Star is a short animated film (about 25 minutes long) created by one Makoto Shinkai on his home computer in Japan, mostly on his own. It’s not Shinkai’s first self-produced effort but it’s the work that really made his name in the industry. Part of his (and the work’s) notoriety has to do with Voices‘ unusual “one man animation studio” origin. Novelty value alone does not account for its popularity and critical reception, however.

On one level, Voices is about a girl who goes off to fight aliens during an interplanetary war. That’s really just the framing device as well as an excuse to show space combat action sequences. The meat of the film centers on the strain this war places on the relationship between the girl who keeps being taken farther and further away from Earth, and the boy who stayed behind. The only communication they can share is email messages sent between their phones. 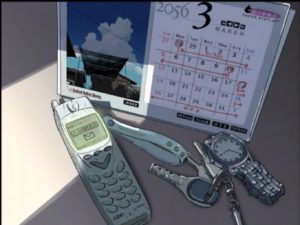 Even in a shot of phone, keys, watch, and calendar, Shinkai works in a picture of pretty clouds. An animator after my own heart.

As Mikako, the combat mecha pilot, goes from Mars to Jupiter to trans-Plutonian orbit and beyond, the textual messages to Noboru (and his replies) take longer and longer to deliver. From her perspective everything’s happening at once due to the vagaries of physical faster-than-light travel versus good old light-speed transmission speeds for email. From his point-of-view, his girlfriend’s messages become too few and far between to bear. How do people stay connected and maintain hope across the vast reaches of space and time?

Let’s get one of the reasons I really like Voices out of the way right now: 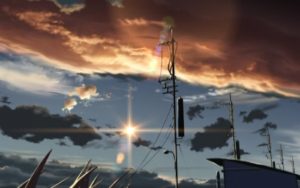 This kind of sky image composition is a Makoto Shinkai signature motif.

I mean. Just look at that. Now imagine it animated. This dude knows how to make gorgeous cloudscapes. Don’t believe me? Take another look: 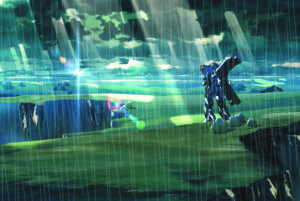 Crepuscular rays, aw yeah. Admittedly this scene is MUCH better looking animated than as a still image.

What I’m saying is, this little film is a bit less than half an hour of pretty, pretty moving pictures. The fact that it’s also a poignant Sci-Fi tale is icing on this beautiful cake.

I dig that poignant Sci-Fi tale, too. We’re shown each of them in moments of wistfulness and as they deal with the day-to-day of their increasingly-different lives. Moments of hesitation, proud moments, weak moments. I find myself rooting for them individually and together.

Also we get a few cleverly done giant robot space combat sequences. I’m not immune to the appeal of that sort of thing, having grown up on Voltron and Robotech and such. So that’s nice.

If you’re not into giant robot space combat then you may find yourself unwilling to sit through Voices. While those sequences aren’t really the point of the film, they still make up a sizeable percentage of it.

While much of what you see is gorgeous, one of the weak points for me is the character design & animation. 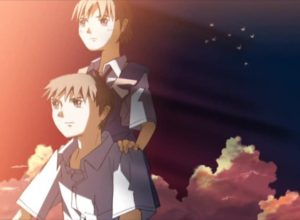 I like them as characters, mind you. And the sketchy modeling & animating aren’t deal-breakers for me. Oh hey: Pretty clouds!

Toward the end it gets weirdly metaphysical and a bit vague. I’ve been watching anime long enough that I’m used to this sort of thing. Your mileage may, of course, vary.

You may need to turn off your “but wait” thought processes for the duration. Like, “How are either of their phones still functional? Why FTL travel but not FTL communication?” Just… don’t. Let it go, Elsa. The point of the film isn’t realistic science, as evidenced by the giant robot space combat stuff. The point is taking that Sci-Fi framing device and digging into how the characters deal with these circumstances. If that’s a deal-breaker, you should probably skip Voices. Sadly.

The introduction of computer technology to anime production resulted in some interesting visual ideas being realized quite effectively in Sci-Fi combat stories. I mean, look at this control pod interface: 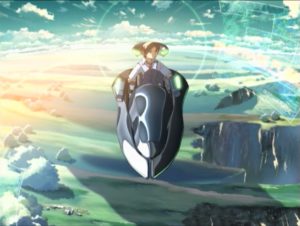 I’m not sure that the semi-transparent information display elements would actually be practical, but it makes for a great look in the film and you can see how something like that setup might be made to work out.

Those of you familiar with Shinkai’s later and higher-resolution efforts may wonder why I picked Voices over pieces like The Place Promised In Our Early Days or 5cm Per Second. Honestly, this entry was a toss-up between Voices and Place. I mean, Place has many many more scenes of clouds, in much greater detail! There’s an actual multi-threaded plot! Sci-Fi shenanigans abound! What’s not to love?

Thing is… while I admire those other two films, I don’t quite love them the way I do Voices. If you happen to watch this one and want to seek out more of Shinkai’s stuff, I highly recommend doing so. (Note that 5cm is, as its title kind of suggests, a slow-moving piece. Great work of art! Not as much fun.)

As of this writing, CrunchyRoll has Voices of a Distant Star available for streaming. You can also buy it on DVD via Amazon and various other venues.

Passwording In The Twenty Teens