I had plans for the next Blender project. Unfortunately, I ran full-speed into a logistical wall: I can’t do what I wanted to do with the audio-based triggering of effects. Not at all. That setback basically means that I can’t at all proceed with one of the original ideas that got me into doing Blender in the first place.

After a couple weeks I finally came up with a loose game plan for the other project/idea so I’ve started poking at that. I lost that couple of weeks to just being frustrated and annoyed with myself and with the limitations of the technology I have on hand.

On the upside: I submitted my taxes and the refunds have already arrived. I spent part of the refund money on a new mattress, which is long overdue considering how long my old futon mattress has been in dire need of replacement.

At any rate, hopefully I’ll have more stuff to show off before much longer. There’s some scenery construction work to get done and at least one more iteration of the duck design before I can get the ball fully rolling. 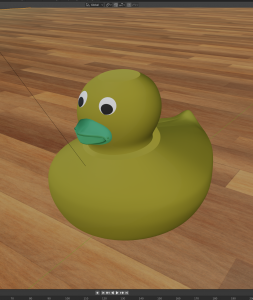 My next attempt will probably involve building the main body and head in one sculpting pass. Wish me luck.

So here’s hoping I don’t run into any other brick walls, eh?