On Christmas Eve I was struck by terrible, marvelous inspiration. Before bedtime that very day I kicked off rendering animation frames in Blender, having already sourced and prepared the music and text, then assembled all the elements in the 3D environment. My original plan was to post the completed video this month but it turns out that rendering ~3300 frames at 1280×720 resolution will take longer than expected on my poor GTX 1070 graphics card. Maybe for New Year’s? Maybe. 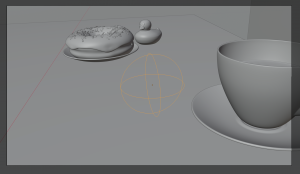 Yes, I am reusing the donut and coffee cup from the Blender Guru tutorial. It’s work I don’t have to redo, okay?

It’s only a two minute video. Among other things, this suggests I won’t be doing Cycles-based animation in Blender as a regular thing. (Now, music visualizer videos with the Eevee renderer? That’s another story…) 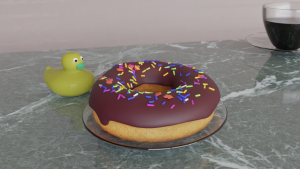 The duck is new, actually. I started over after making the one in the previous video. Meet the Mk4 plastic duck toy!

This video won’t even be done when Blender is finished with the rendering because then I’ll need to load it all into Premiere and add subtitles. (Look, it’s either subtitling or you have to listen to my singing voice. Subtitles are the better option, I assure you.)