I had something else queued up in this slot for almost the entire year. It wasn’t a show I was wild about. I needed a 51st entry (the final one, number 52, is a doozy and has been in that slot for months) and went with something I figured would do well enough. I liked it, I guess? That was enough?

Then I realized I’d be doing a disservice to the project’s goals to gloss over one of my formative fandoms, the show that started it all. I’m supposed to be writing about animation which brought me joy. So, here we are.

Robotech is an 85-episode long mish-mash of three different Japanese shows, cobbled together into something resembling a cohesive narrative structure. It spun off toys, books, and various other projects but for our purposes we’re talking about that original rambling glorious groundbreaking mess of a show. 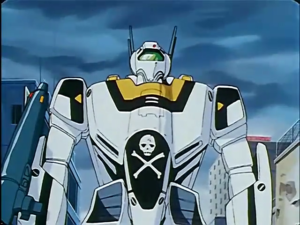 And here’s your giant-robot warning, right up front!

In the late 1990s, an alien spaceship crash-lands on an island in the Pacific Ocean. It is the harbinger of a series of alien invasions, each kicking off a war over a precious but mysterious substance called “protoculture.” The humans ultimately prevail in each of these wars. The cost, however, is tremendous time and time again.

There are some other stories in there as well but that pretty much sums it up for the most part.

I can’t even pretend to be objective about this one, sorry. Let me explain:

Hillsboro, Oregon, in the early 1980s. Mom and Sis and I lived in a little apartment across Cornell Road from the middle school I attended. Every morning, without fail, I’d watch Robotech until the end credits just barely started. Then I’d quickly turn off the TV, grab my bag, sprint across the road to school and arrive just in time for classes to start. This was my routine for months on end.

I lived and breathed this show during one of my formative years. Funny thing? My current workplace is just down the street from where that old apartment used to be. I can even grab lunches at the same Burger King if I want to. Let me tell you, starting my current job was deeply surreal to me at first. 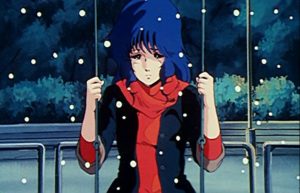 Sad Girls In Snow: The Early Years. Eat your heart out, Kanon!

But let’s be real: This is a nostalgia pick, pure and simple. I loved this show. Few things since have jammed themselves so deeply into my psyche; Babylon 5 is comparable and may be the only thing to surpass Robotech in my heart of hearts. Blame it on my youth, maybe.

And here’s where I beat up on a show I love.

For starters, it’s a hot mess assembled by writers and voice actors of varying talent out of three entirely unrelated animated properties in an attempt to sell toys. The bulk of the show consists of most of an actual anime classic, Super Dimension Fortress Macross, and thanks to (or in spite of) the various efforts of the American team, a lot of what made Macross a household name in its home country survives the translation. Somehow. But it’s still a mess, with the overarching story requiring some odd re-purposing of existing elements.

You may find yourself thinking, “Didn’t she have blue hair as a baby?”

If you decide to give Robotech a try, remember that it’s early 1980s television animation, 4:3 aspect ratio, and not all of it has aged particularly well. And as with a lot of cartoons aimed at American kids over the entire history of television, the voice acting may be… off-putting at times.

Oh, and there’s the fact that some of our erstwhile heroes need a clue-by-foor to the skull on a fairly regular basis. The closer someone is to being in the lead role, the more likely they have some serious behavioral issues to work out as well as being utterly useless when it comes to romantic entanglements. I mean, that’s not unusual in a lot of similar adventure shows but it bears mentioning anyway. (I’m looking at you, Rick Clueless-As-Hell Hunter.)

I’m led to understand thanks to my research for this entry (I’d forgotten bits and pieces over the years) that the novelizations are no longer particularly considered canon due to a couple of subsequent projects that saw the light of day after a while. I don’t care, you can have them when you pry them from my cold dead hands, etc, etc. (I imagine this is how some Star Wars fans feel about the expanded novelization universe after the slate was officially wiped clean going into this latest round of films.) There are novels covering the aired material, then another series of novels working from the basis of what was supposed to be a sequel series (The Sentinels), and a couple other entirely original novels to wrap up the timeline. I won’t go so far as to suggest they’re great works of art. Like my love for the show itself, my feelings about the novels defy rational thought. Still, I consider them as doing solid work elevating the source material to really well-portrayed space opera and recommend them as fun, light reading whether or not you decide to watch the show itself. 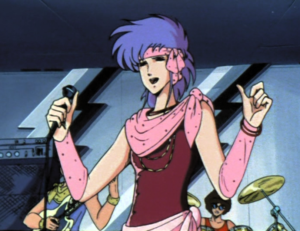 Minmei might have been “the” idol, but Yellow Dancer got two of the best songs. (“Look Up! The Sky Is Falling” and “Lonely Soldier Boy”)

The central figure in the creation of both Robotech and the old Streamline Pictures studio which imported a number of anime movies and series is the late Carl Macek, a man for whom both thanks and blame are deserved in abundance. Without his efforts, anime fandom in the USA might have taken a lot longer to gain momentum. On the other hand, it’s generally recognized that most of the properties that he and his teams imported were mangled badly in the translation process. All these years later it’s mostly just a side note in history, I suppose.

If you want to watch an anime series that is to the original SDF Macross as The Force Awakens is to the original Star Wars film (which is to say, slavishly devoted to the original’s structure while somewhat subverting its tropes), check out Macross Frontier. It’s modern, it has some great music, and I dig the ambiguous, almost polyamorous ending.

As of this writing Netflix offers Robotech for streaming, as does Amazon if you have Prime. Presumably Amazon’s version is “digitally remastered” and so forth.

How can you possibly top this entry in terms of fervor and wordcount?