When I started assembling titles for this project (I know, I’m as shocked as you are that any planning at all went into this) I started out focusing on anime. Anime is my favorite source of animated happiness but it’s not my only source. Sometimes I get my kicks closer to home.

Being an episodic domestic cartoon there isn’t much in the way of an overarching story. You get some shorter arcs here and there, plus recurring characters which contribute to a sense of a larger plot. Generally speaking it’s a new little adventure every week. Sometimes the story is in outer space, sometimes it’s around Metropolis. You never know which you’ll get next.

So it’s not really “a story.” What it is, instead, is arguably the most faithful and delightful rendition of “the big blue Boy Scout” ever put to film. (Even more, it’s almost certainly the best depiction of Lois Lane ever.) 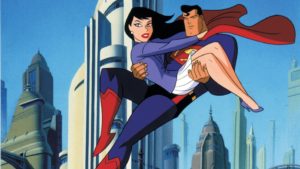 Lois Lane does not, in fact, spend most of her time falling from buildings.

Every fan of comic-book storytelling has, at some point along the way, been asked to pick a side: Batman, or Superman? I like the flying-rodent detective gadget dude well enough, but I’ve always been more of a Supes fan. And this show gets him so very, very right. The principled defender. The orphan. The farmboy. The inquisitive helper and test-subject at S.T.A.R. Labs. The unsuspected smart-ass. (“You’re a sick man, Kent.”)

The other characters are also fantastic. A big part of why they work is the voice talent assembled by the amazing casting director, Andrea Romano. Let’s see: Tim Daly as Supes (with double duty as Bizarro), Dana Delany as Lois, Clancy freakin’ Brown as Lex freakin’ Luthor, Mike Farrell and his wife Shelley Fabares as Pa and Ma Kent, with guest appearances by folks like Mark Hamill, Michael Dorn, both Malcolm and Roddy McDowall, Ron Perlman, Michael Ironside, David Warner… and so on, and so on. 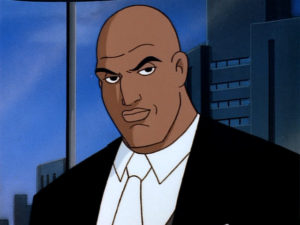 And it’s not just that a bunch of big names were thrown at the show, it’s that each actor is absolutely marvelous in their role. The show is a joy to listen to as well as watch. Even, or especially, when scenery-chewing is called for.

There’s an inescapable problem in telling a string of Superman tales. You can sum it up in one word: Power. When it gets down to the action, the amount, variety, and effectiveness of Supes’ power is far more based on the needs of the plot than on anything you might call “consistency.” If that’s the sort of thing that takes you out of a story, you might have issues watching S:TAS. 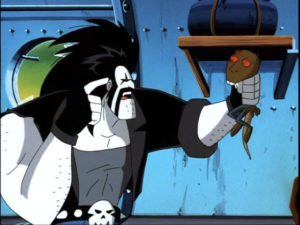 And sometimes really weird dudes from outer space show up. Whatcha gonna do?

It’s also a bit dated by modern standards. A 4:3 aspect ratio, almost nothing in the way of computer-assisted animation, and because it was made for Saturday morning television it’s not the biggest-budget production you’ll ever see. This is the oldest series I’ve featured in this project… thus far.

Keep in mind that I’m a fake geek guy: I didn’t read all that many comic books as a kid, let alone as an adult. So this series includes my first real introduction to a Green Lantern. 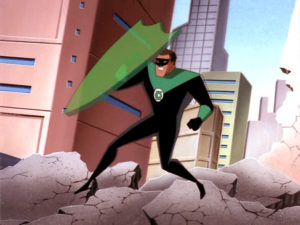 If you don’t want to watch three whole seasons of Superman: The Animated Series, do yourself a favor and at least find the three-episode arc released on DVD as World’s Finest. Unlike that ridiculous Dawn of Justice film, this is a Batman and Superman team-up worth watching. Trust me on this. Clark, Lois, and Bruce playing off of one another, with bonus Joker shenanigans? It’s a joyous treat.

Buy the DVDs, pretty much. Or pay Amazon to stream the episodes. (It’s included with Prime as of this writing.)