Two Loaves For The Price Of Two

Instead of focusing on three dimensional digital fakery, I decided on my recent vacation to spend some time focusing on three dimensional edible foodstuffs. That’s right, it was time to try my hand again at making fresh homemade bread. I used a different recipe (sorry, “formula”) from The Bread Baker’s Apprentice, my guiding tome. Lesson learned from the first go-around: Don’t be so knead-y.

Here’s how that panned out. 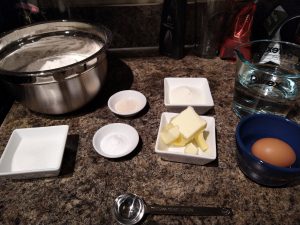 I started at six thirty in the morning on the last day of my vacation, the day after the DST change no less, because I had a movie I wanted to see shortly after noon. A madman I may be, but I’ve always worked best to a deadline.

Last time, my inaugural breadmaking foray, I over-kneaded the dough and it was a bit dry besides, so the final product came out a bit on the dense side. I did not make that mistake again, though I overbalanced a bit and ended up with too sticky of dough for a while. Luckily when I added some flour to fix the consistency I didn’t go overboard. 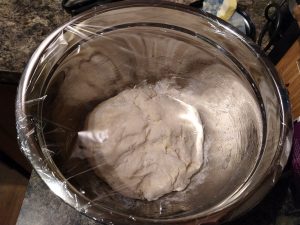 One nice thing about this hobby is that a large percentage of the time spent making bread involves waiting for proofing (rising) stages to complete. This meant that I could read, goof off a bit, and take care of other chores. 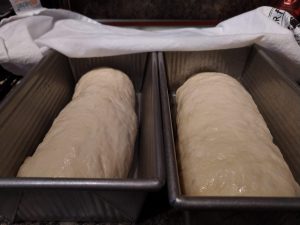 One of the minor miracles of this project? I managed to get a nearly even split of the dough into two loaves.

That (somewhat blurry) photo above shows another of the problems with this attempt: The instructions call for spraying oil lightly atop the loaves, but all I had available was a silicone brush so there’s a fair bit more oil on those things than actually intended. Whoops. 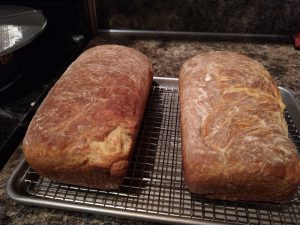 I can’t complain about the results, though. Not one bit.

Lessons learned from this go-around: Get an oil misting bottle instead of using a brush, and have a small amount of flour and water on hand during kneading in case things get too sticky or too dry, respectively. Other than that? All’s well that ends deliciously.