Before I go looking around for an app with which to post content from my phone, I figure I should try using the built-in mobile web interface as a test. Let’s see how it works.

And I’m using the new WordPress “block editor” because what the heck.

I guess this is doable. I’m not sure if I actually like it though. Ideally I should be in front of a proper computer to do any useful, long-form writing. But in a pinch? I guess it’ll do.

I expect to be haunted by Enzo Ferrari’s ghost now.

I’m not sure how to feel about assembling LEGO doodads as a creative outlet. All I’m doing is following instructions. On the other hand, if I take a lot of photos and write a snarky blog post about it… yeah, here we go then.

END_OF_DOCUMENT_TOKEN_TO_BE_REPLACED

A couple weeks ago our household network storage device, QBAY, bit the dust. It shuffled off this mortal coil. It ceased to be (functional). Bereft of life, it rests in pieces. It joined the choir invisible. It… well, enough quoting Monty Python, you get the idea. To replace most of its functionality I signed up for Google One so I now have a two terabyte bundle of online storage for most of the miscellaneous data that I stored on the NAS previously.

To replace the rest of its functionality, that of a networked music library device, I decided to take the plunge into building a system centered on a Raspberry Pi kit. The plan is to utilize Pi MusicBox with a side order of Samba to allow sharing and updating the music library over the network. One big upside of this plan is that no individual piece of the puzzle costs more than $40. Considering I just wasted $100 replacing a hard drive only to have the entire storage device go kaput, cost-effective solutions are rather appealing right now.

After consulting with an expert known to the household I put in an order for a bunch of stuff. This week, the stuff arrived! 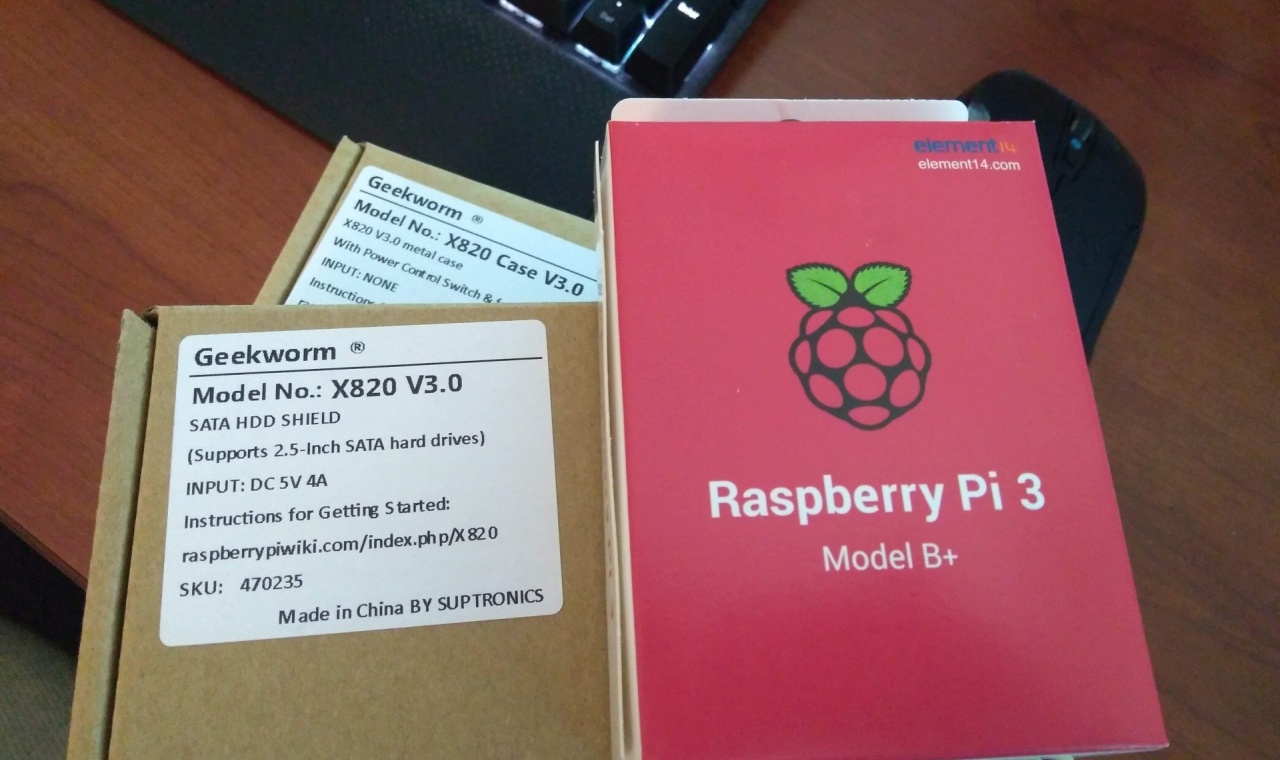 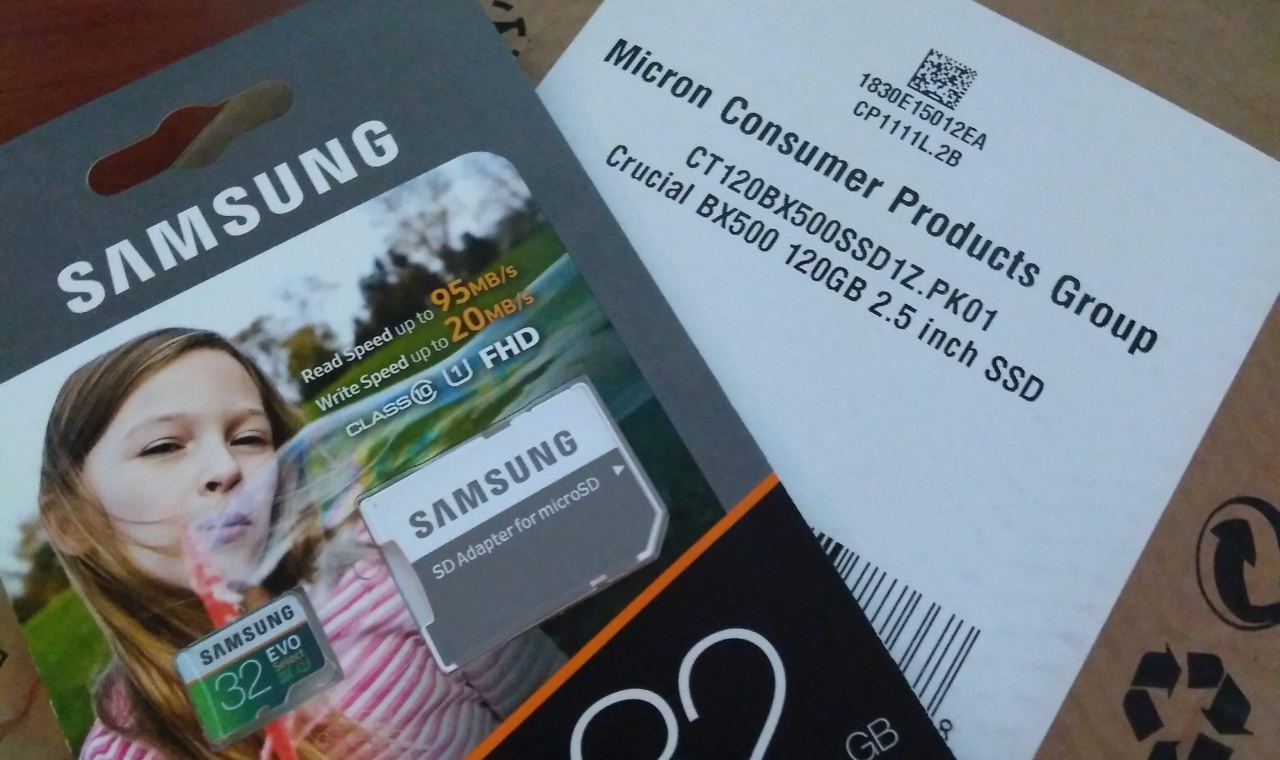 This evening I set about performing the physical assembly, with plans to load the operating system and see if it boots & runs afterward. One of our excellent Ikea-sourced tray tables served as a workspace with nice safe borders to prevent losing teeny tiny screws in the carpet. 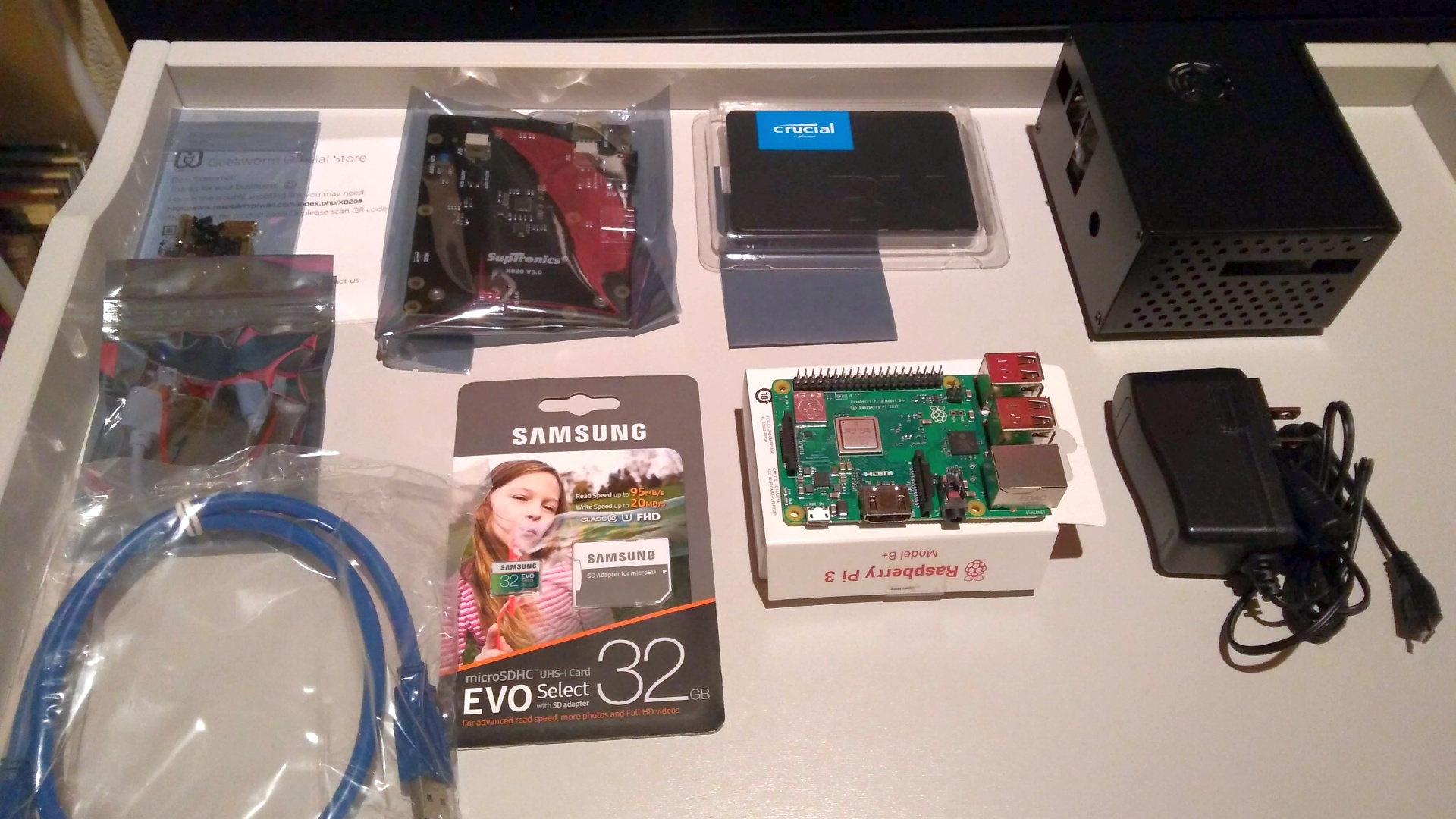 For a few minutes I panicked because I thought I’d bought the wrong case for the specific model of Raspberry Pi board, but, no, I was just mistaken about how it all was going to fit together. Hooray for that! On the downside, the power adapter is absolutely perfect… for an arrangement other than the one I’m assembling. (Basically the Pi will get its power from the X820 SSD add-on board, which takes an entirely different plug. Sigh.)

I guess I have a spare power adapter if I ever get another Raspberry Pi or disassemble this kit later on. Silver linings, something something.

After mis-reading the instructions the first time, I finally got to the point where it vaguely resembled the correct configuration. 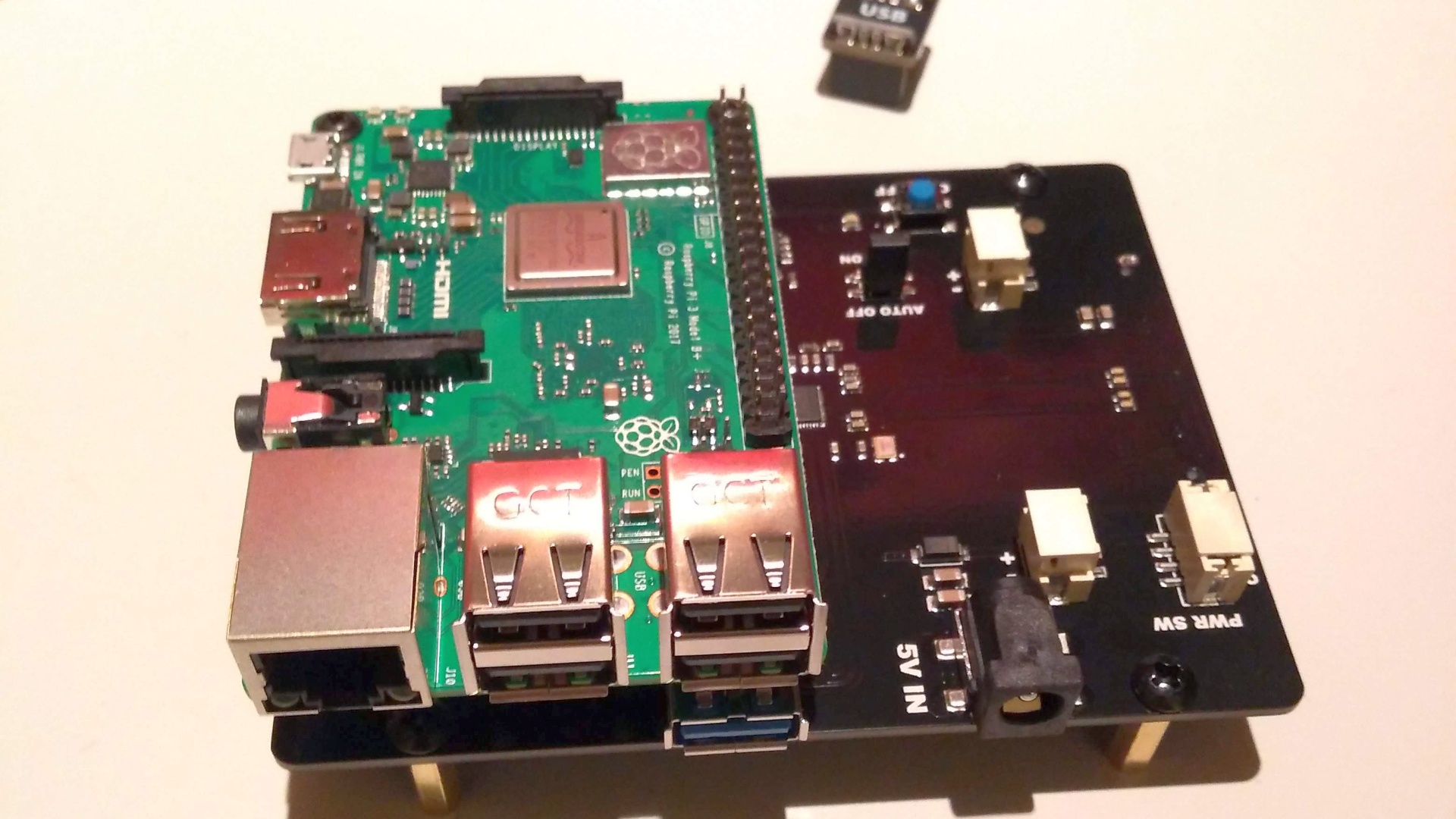 I should describe what you’re seeing: On top is the Raspberry Pi 3 B+ model, attached to the X820 board from Geekworm whose job is to connect and power the 120 gigabyte Crucial solid-state drive (hidden underneath).

It was right about here during the assembly that, going through the instructions to make sure I hadn’t missed anything, I learned about the power supply problem. The correct one is on order and next week I should be able to complete the build. 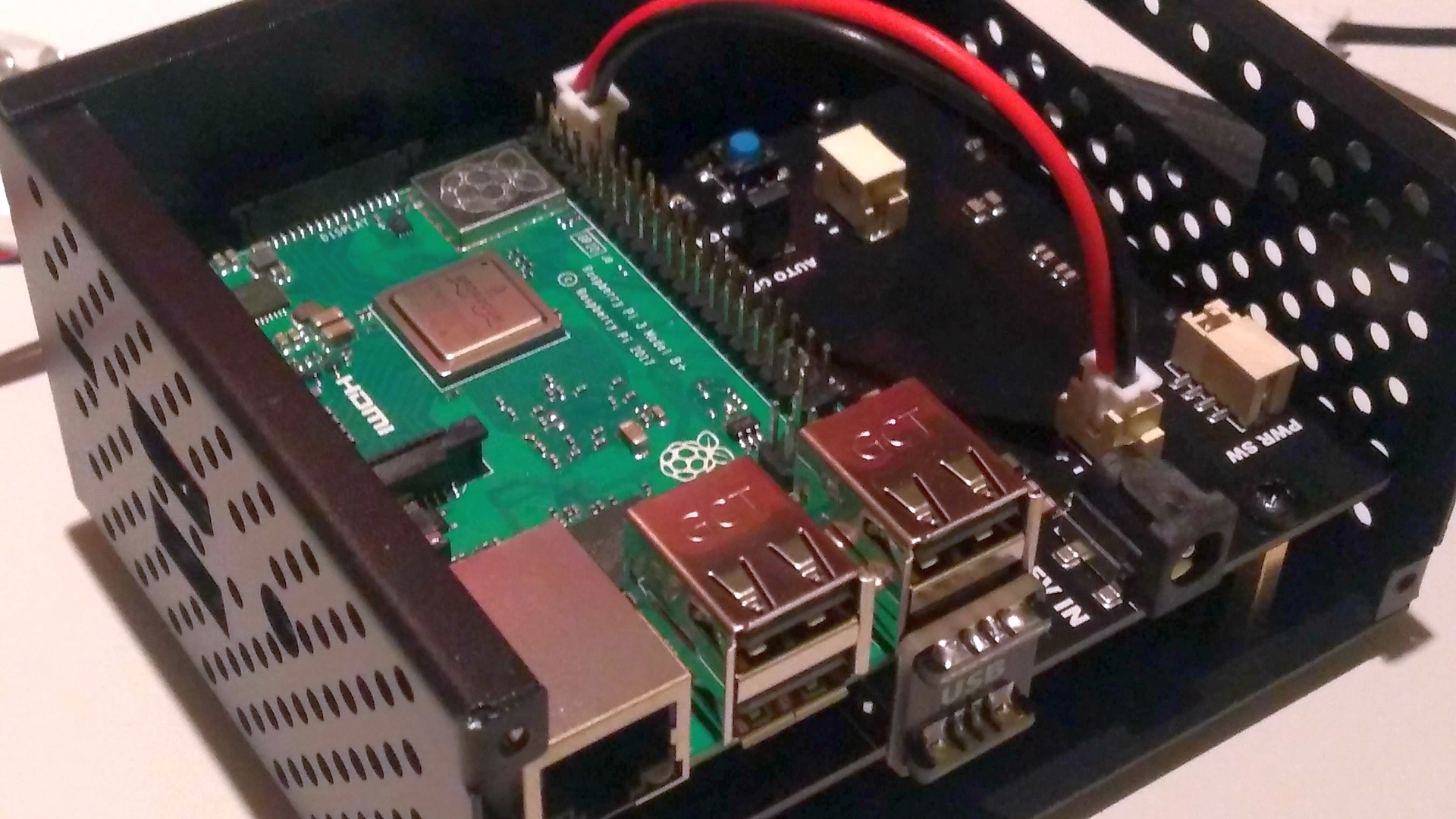 Soon this thing will be blasting tunes for the benefit of the household. (I hope.)

How charming! (Adventures in loot boxen)

Against what might be called my “better judgement,” had I any to speak of, I decided to try out one of Right Stuf’s monthly loot box “Anime Haul” deals. They had my number this time, the theme being Music. (It was a rough week; I decided retail therapy was as good as any other kind.)

The box arrived yesterday. One Hatsune Miku manga (as yet unread), one soundtrack CD (Kamichu, and it’s… okay? generic orchestral ST stuff), one Blu-Ray (Sora no Woto / Sound of the Sky, which I remember liking a lot and look forward to a rewatch), a mug (tie-in for Your Lie In April, which I’ve never watched), and two cellphone charms, one of them is tiny and unrecognizable to me, and the other is… well: 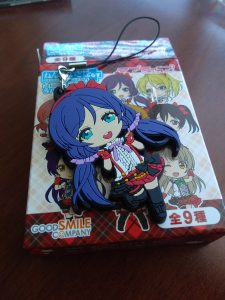 Meet Nozomi Tojo, of the Love Live! franchise, apparently. Friend Wonderduck recommended one of the shows in the series recently, maybe this is a sign that I need to get on that.

My PokÃ©mans, I Am Showing You Them

I had the day off. I had plans fall through for the day. I recently figured out how to make the AR camera work again in the PokÃ©mon GO app. (Turns out, it needs permissions to store files. Derp.)

So I went to the Tualatin Hills Nature Park, a place with a staggering amount of PokÃ©stops all along one pleasant set of hiking paths. Last time we visited there were a whole gaggle of Ghastly… not so much, this time. Not a single one, actually. But I found a few other things to catch, such as this smarmy little electric rat: 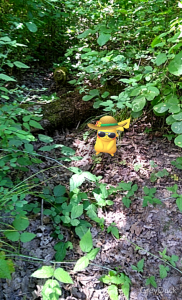 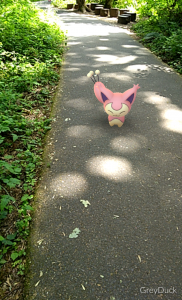 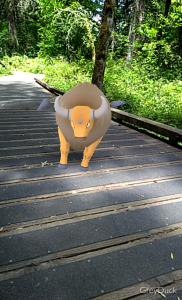 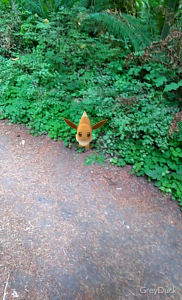 After nearly twelve years in the same office at work I have shuffled over to a slightly larger, somewhat newer office. It features a standing desk and a window taking up almost one entire wall. (My old office could best be described as a “lightless cave.”) While we were figuring out what furniture should go where during the great migratory shuffling, I took note of a particular shelf unit and laid claim to it. Why? 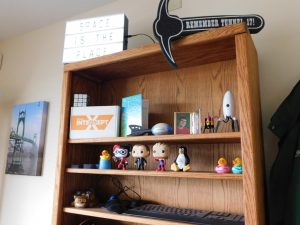 Lots of narrow shelves make for great display of geeky artifacts! Nobody can mistake this space for belonging to anyone but me, now… for better or worse.