I’m the only one who’ll notice.

When building the comic, sometimes I fret about the fact that I don’t have a set style guide for things like (let’s say) the struts that connect word balloons within a comic panel. They tend to come out in varying widths and not always aligned perfectly. Shouldn’t I set some rules, make sure everything is uniform and neat and tidy?

I tried to tweet about this, but for some reason folks were getting a 404 error… even though the image link was 100% correct. So. I don’t know whether WordPress or Apache is at fault. I don’t have the luxury of time to spend tracking it down, either, especially when a simpler solution can present itself: I can blog about it! Duh!

So. Here you go (click the image to embiggen): 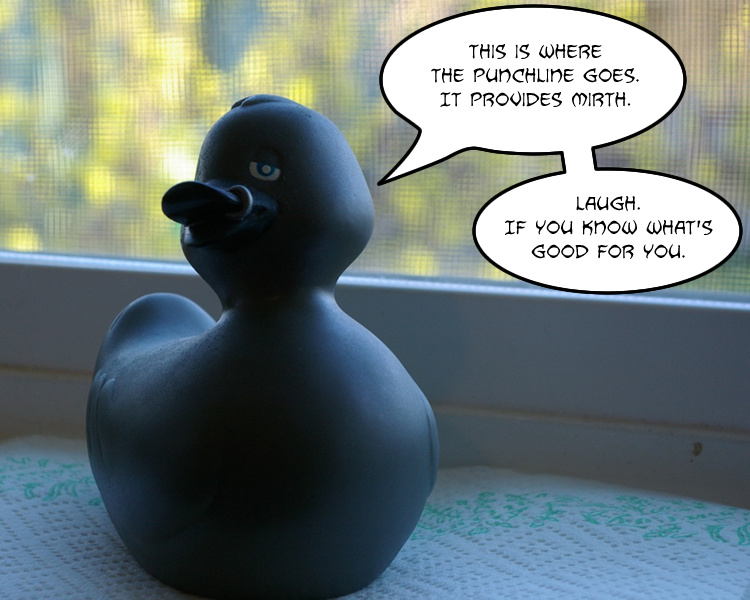 Meet Poe. He’s a pretentious little twit duck. Figures he’s named after Edgar Allen, but everyone else knows that his name’s just short for poe-zur…

(Also, I won’t be using the Dragonbones font in the actual project. I just liked how it looked during testing so I kept it in the “final” image.)

Think of it as a compromise on NaNoWriMo.

In a flash of crazed, half-asleep inspiration, my next ambitious project just came to mind. It pushes me in a desirable direction, it’s a bit “multimedia” even though that buzzword went out of style ages ago, and I’ll have to work just that much harder to pull it off versus the effort I’m putting into my Summer Music Project. One should challenge oneself, I’ve been told.

So here’s the idea: What if I wrote a serialized story that came with its own soundtrack?

To pull this off I’ll have to put together more prep work than I’ve done for the Summer Project. I’ll need a plot outline and a list of appropriate songs. At least I won’t need any additional hardware. I might try some new software, though.

Maybe I’m crazy. Maybe I’ll give up on this idea like I’ve done with so many others in my life. Maybe, just maybe, I’ll pull this off and build up the confidence to try something bigger…

“Now, my friends, without further ado and to permit those holding their breaths to breathe…” — Masterharper Robinton, from Anne McCaffrey’s “Dragonsinger”

Here, then, is the back half of the crazy project of the week.

Nobody who knows me at all will be surprised to learn that I used to make mix tapes, the real thing, back in the 80s and early 90s. One of my favorite tricks was to use one set of artists or title elements or what-have-you in one sequence for side ‘A’ of the 90-minute cassette and then reverse the sequence for the ‘B’ side. The effect, especially in the popular players of the day which would play both sides of the tape over and over until someone pressed the Stop button (or until the tape jammed or broke), was that of a musical journey, bouncing back and forth along some theme or another.

I moved on to burning CDs when technology left cassettes behind for good, but it’s just not the same. CDs will cheerfully repeat their lone sequence and that’s all they can do. I can’t play the same thematic tricks in a simple circular form that I could with two “sides” of tape. Complexity is limited by the seventy-or-so minutes you have to work with. The one new feature, that of shuffle play, is nearly useless for my purposes.

I must admit, of course, that this little project doesn’t fit the mold of the classic mixtape either. It’s two gigantic MP3 files separated by journal post numbers, launched by two different player widgets, and so forth. All this will really do is give you an idea of the kind of things I like to do, namely playing around with themes and patterns. Oh, and many of these are among my favorite songs, so there’s that benefit as well… dubious as it may be for someone who doesn’t share my particular tastes. (That would be 99.99% of humanity.)

I tried to use one “current” and one “older” song from each artist as well as differing the tone between directions of travel. Duran Duran’s upbeat “Nice” is balanced by the somber “Winter Marches On,” while the Pet Shop Boys’ dystopian “Integral” and exuberant “Metamorphosis” neatly showcase the dark and light sides of their musical output. The plan didn’t always work, and in crafting the two mixes I ended up with imperfect pacing both directions due to the multiple restrictions and challenges I’d faced coupled with my lack of recent practice. I was also forced to cheat a little bit on one of the artist selections, as Kevin Gilbert’s limited musical output didn’t give me any choice if I wanted to keep him in.

Yet, I’m generally happy with how it turned out… all things considered.

I hope you enjoyed this little trip into both my psyche and my music library.

As promised, here’s the first installment of my brilliant idea. It’s a there-and-back-again music set using the same artists on the way back as on the way out, in suitably reversed order. I cheated in one particular case, but it was a case of “close enough” as well as “look, he just didn’t put out that many albums, okay?”

So. Enjoy, if you’re so inclined.

If the gods are kind, I’ll have the second half posted tomorrow night…

I’ve not yet left the United States to see foreign parts, but my music collection has gone far and wide. In a bit less than an hour you can visit the Congo, Amlapura, Kashmir, Beirut, London, Leipzig, Moscow, Bangkok, swing through California (domestic and yet alien), and end up in a couple of very cold places like the mountain K2 and the continent of Antarctica.

Have you packed your bags, or at least your headphones? Okay then, enjoy your trip!

I should go out on an adventure in the blustery drizzly damp, y/n? [...]

The problem with taking time off from work is that it's not like I'm going to go anywhere, and now I'm even more keenly aware of how terrible the neighbors… [...]

Day One of mini-staycation: Spent most of the morning playing #FireEmblem Engage, and now we're going to get our weekend grocery shopping out of the way a couple of days… [...]

@violetblue Oh, I just love seeing that layoffs tidbit including Sophos, the vendor we just deepened our financial relationship with. *long dead-eyed stare into the abyss* [...]