Getting Here Is Some Fraction Of The Fun

The flights weren’t so bad. Getting through security at PDX went normally, the flights were early, there was only one bit of confusion as gates were scrambled around last-minute for the puddle-jumper leg of the trip, and I experienced almost no ill effect from being in aisle seats the entire six or so hours I spent in airplanes.

Now, the cab ride to the hotel was more entertaining. First, when the guy calls and says “I’m in a black Lincoln Continental,” that’s not really much help because every cab was a black Lincoln! Then, the dispatcher had given him the wrong destinations, so we spent a few harried minutes getting that squared away. Finally, we drove right past the hotel without realizing we’d gone right past the hotel.

He was a nice Jamaican fellow, though, and we passed the time amiably once we worked around the various issues.

The hotel is nice, but a bit quirky. I’ll see about putting together an image post after classes are done so I can explain that a bit better. Also, dining amenities are… interesting. Let’s just say I’m currently located along one of those roads populated mostly with run-down mini-strip-malls, which means it’s either hole-in-the-wall diners or fast food chains. Well, chain. McD’s. Which… only if I’m truly desperate, folks. Ugh.

And now… off to the first day of classes. Wish me luck?

A Series Of Metal Tubes

I’m not so keen on using air travel to get there.

Tuesday morning I board a plane bound for Connecticut (well, Chicago… where I’ll catch one for White Plains NY… you get the idea) so I can take a two-day training & certification process for one of our vendors. I’m the right guy to send; I wish I wasn’t. I’ve been losing sleep, worse each night I get closer to the trip, over every thing I can think of that might go awry.

So… what will I forget? The boarding pass? My laptop? A phone charger? The possibilities are staggering and endless! Wheee!

We went to the Hillsboro public library for an all-staff photo shoot. I took a picture, too: 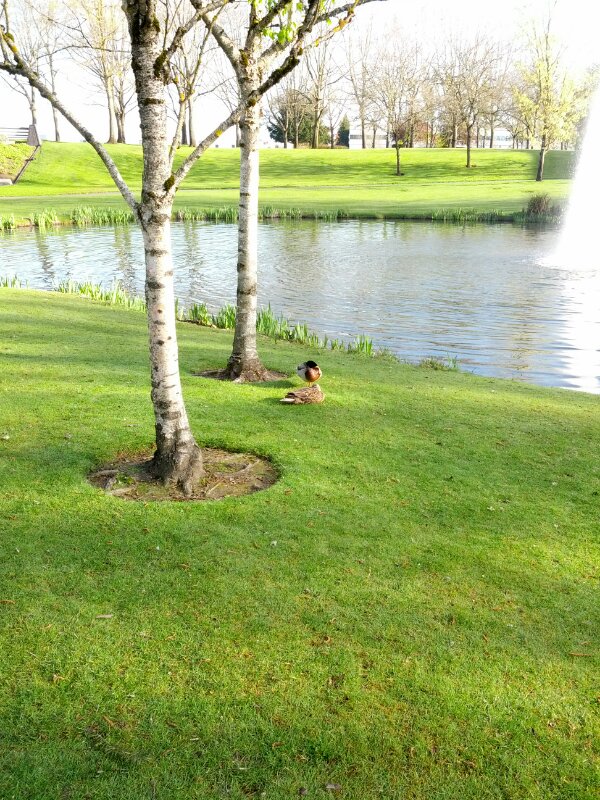 These ducks were still asleep, though. I was so jealous…

While searching for a way to make MediaMonkey write “now playing” data into Lync 2010’s “What’s happening today” note field (clearly, this is critical work-related tinkering) I ran across a link to an argument with someone trying to solve a problem the wrong way. To illustrate, I’d like to tell a short story about one of my proudest moments in my previous job. It wasn’t a particularly cunning software or hardware implementation, but rather it was finding common ground with management regarding a problem user.

One of the sales managers at Entercom came to me one day and asked me to find a solution to the problem of a new account rep hire who spent all day on ESPN’s website, among others, checking box scores when he should’ve been writing proposals and making calls. We discussed firewall settings, the pros and cons of various “nanny” software packages, and at the end I politely pointed out that what we were trying to do was to use technology to solve a management problem. The loose nut behind the keyboard was the actual problem, and all I’d be doing is giving him hurdles to jump over on his way toward continuing to goof off.

The manager thought about that for a minute, then agreed that he’d first try direct conversation with the hire, followed by disciplinary action if needed, then come to me for the “firewall fix” only if the other steps failed.

Within a few weeks the new hire was a new fire.

I feel good about this story, not because I avoided any technical heavy lifting but because I was able to communicate effectively with someone from a whole other world (sales) about the limitations and relevance of technology as applied to personnel issues. As a side-benefit, my working relationship with that particular sales manager improved considerably because I was able to give him the tools to solve a problem even though I didn’t actually deploy any software or hardware. We were on the same page, and that’s what mattered.

There’s nothing quite like opening a new support ticket with a software vendor, providing all the details they normally ask for right up front, including a ZIP archive of all the pertinent diagnostic logs, and getting back a response which is the tech-speak equivalent of, “So when did you stop beating your wife?”

Which is, I suppose, preferable to the other vendor I have a ticket open with right now who haven’t touched any of our tickets in almost a month. No response, no activity, no fix, nothing.

If we treated our clients like this we’d be out of business.

A Body Made Of Ouch

I should be at work right now.

I’m not, because I spent all night gulping down pain medicine and trying to find a position in which I could sleep. There’s a knot in my back at my left shoulderblade that hurts like [censored]. There hasn’t been a minute in the last 15 hours in which it hasn’t hurt at all. I occasionally slept through it, when I became too exhausted and when the meds kicked in for a while, but it never lasted long.

There are important things to do. The Kaseya server needs some attention, most importantly. I haven’t even entered my time from yesterday. I hate letting the company down like this. I almost got up and went to work anyway, but finding myself on the verge of tears merely from sitting up in bed put the kaibosh on that idea.

So, I’m going to spend the rest of the day trying to find a comfortable-ish position from which to grit my teeth and endure until this knot goes away. Wish me luck.